Great News!  Missions have been updated and some wonderful new features have been added.   Since no one else posted constructive information on the updates, I thought I'd take a crack at it.    Check back here often as I'll be updating the blog as more and more features – (documented and undocumented) are discovered :)

There are several (six so far) major changes in this update include the additions of Private Missions;  Inverted Mission Awards; Mission restrictions by Join date; Network restrictions and a new missions at a glance toolbar.    Minor updates in this update  includes tighter restrictions on parameters such as Country, network and Interest.

Oh, and in case you didn’t notice, the mission comments have been moved down and now appear AFTER the other missions display box.

The first major change is the addition of Private Missions.  As I understand this feature, this would be a handy way to provide targeted missions for your followers of a particular interest. You will need to manually enter every ticker that you want to allow for each private mission.    When creating a new mission - at the very top – the drop down box is where to select for Private mission.  Note the two warnings – You can not change this value after setting it AND fixed eaves rewards do not work with Private Missions – only scaled rewards will work.

Note:  The system will automatically flush out any invalid or ineligible tickers – and most times without telling you there’s an invalid ticker.

Inverted Mission Awards  Nifty feature that will allow you to invert the scaled awards, so that newer players will get higher mission rewards.  So far, I’ve only used this with EK scores but I’m told it will work with other networks as well.

(its the dropdown box to the right of Maximum Reward)

Mission restrictions by Join Date Another feature to target newer players.  With this one option box, You can restrict your mission to the newest fresh faces.   The default is calander year 2010.  Remember that the dialog box is year, month and day.

If you specify a join date, then players will see a top banner, such as:

Network/Interest  restrictions   We finally get restrictions!   With this feature we can now restrict by connected networks. I’ve only tested the major networks so far – Twitter, Facebook, Xeeme and Youtube.  As an example, if a player doesn’t have a valid Twitter account connected to their profile, they can’t complete your Twitter mission.   Looks like a great way to cut down on players who hit/run missions. Of course, this option requires that the other players have set their Network/Interests.

Update: the interest/networking bug has been fix.  its now any interested specified.  If you are creating a mission...Remember that you are restricting your mission to that interest - and a player can only have a maximum of six(6) interests specified.

Missions at a glance toolbar New toolbar on includes quick-access buttons to display your own missions; only missions you are eligible to complete.

The far left “My Missions” button is the default for everyone.  In talking with the programmer, he tells me that the "My Missions" sorting includes:

Another new feature, is an option to suppress a mission or all missions from a specific 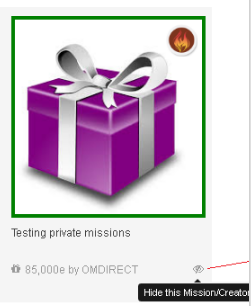 player.  When you look on the mission display page, look to the right of the player name.   if you look close, it resembles a small eye with a slash thru it.  When you mouse over it, you will see a message “Hide this Mission/Creator”   (see image at right)

When you click on the “eye”  you will get a pop-up box (see below)  the left (orange) box will hide that mission and the red (right side) button will cause ALL missions from that player to be hidden from your mission display.

On the very lower left is the option to view/edit all hidden missions.

You can also see this at https://www.empire.kred/missions/dashboard/managehidden

I'm sure there are many more features yet to be discovered, so I will be updating this blog as we uncover more features - both documented and undocumented :)   Feel free to leave informative comments/feedback in the comments below or contact me on the EK website.

Update#2  Seems like the mission creation feature has a weird bug (buggette?).  While creating a mission, when you change a option during the creation, the previous selection is not completely cleared out of user memory.   It looks like the JavaScript is not 100% cleaning out the prior selection and accepting the new option.   I've already submitted this to the programmers and hopefully they can resolve it.   As a workaround, you'll have to dump the mission creation in process and restart the creation steps.